Все новости
Completion of assembly of the sculpture of Atlant opening of the 1 st stage of Katerynoslavskyi boulevard II
14.09.2020 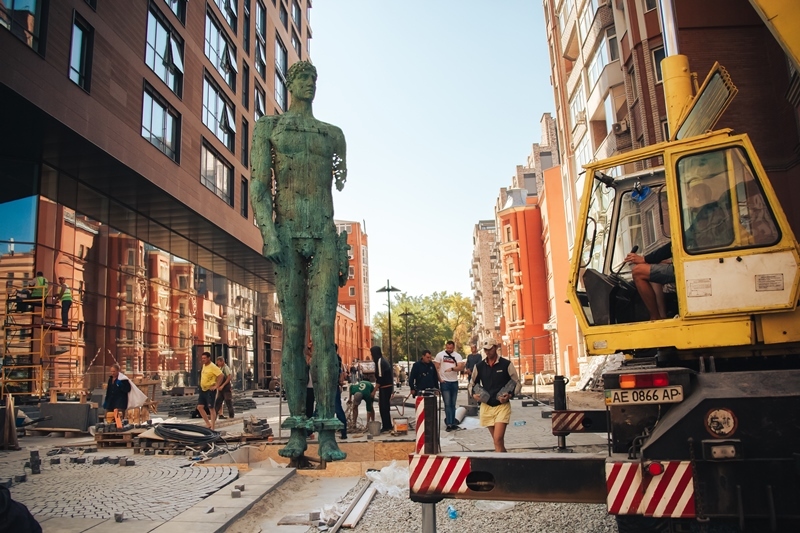 Katerynoslavskyi boulevard II became one of the most expected projects of this year, and even now many curious gazes are rested on the construction site of the famous Dnipro developer Alef Estate, the investor of which Vadym Iermolaiev is.

Pivdenna street looks different with each passing day; the lines of the future pedestrian boulevard and the twists of the artificial stream which will decorate the continuation of the popular recreation area of city people are seen already. The stream is the main landscape dominant idea of new space; it is made from solid blocks of native granite for a total weight of 150 tons, and it will span about as much as 200 meters. This is the longest artificial stream in Ukraine.
The project of the boulevard continuation was created by the architect bureau FILIMONOV &amp; KASHIRINA architects. Another landmark of the boulevard is seven-meter bronze image of “Atlas”. The finish works on its erection and opening of the 1 st stage of Katerynoslavskyi boulevard II were performed on September 11.
Today the “Atlas” welcomes the visitors at the place of two boulevards “meeting”. Figuratively the “Atlas” figure carries the iron fetters he freed himself of, symbolizing the bodily, social, and inner freedom.

Freeing happens at the place of meeting of “past” and “future” which is symbolized by two boulevards. The largest statue in the city was created by Mykyta and Yehor Zihura, the sculptors, who are known
not only in Ukraine but also beyond its borders.

“Dnipro is one of the most promising cities of Ukraine. Our task is to create perfect place for life, development and leisure of city people, preserving the architectural traditions of our city; the place which will the source of pride, where it will be pleasant to spend time and to walk with children. Katerynoslavskyi boulevard II symbolizes the beginning of new life, created with respect to the historical past”, Alef Estate, the company-developer commented on the opening of the 1 st stage of Katerynoslavskyi boulevard II.